Crossroads: “Hope for our Veterans”

We are delighted and honored to be part of “Hope for Our Veterans,” a three-part series organized by  Crossroads Cultural Center

Under Fire: A Candid Look at the Military Chaplaincy

April 24th at 7:30 pm at The Catholic University of America

The event is free and open to the public   —  join us and spread the word!

Crossroads Cultural Center in Washington, DC, is hosting a three-part event that explores “Hope for Our Veterans.”  The first (on March 21st) focused on the difficulties facing too many of our veterans upon their return and it featured Nancy Albin, co-founder of a valuable resource and source of hope: the Los Angeles Habilitation House, which helps returning veterans suffering from PTSD tackle the sometimes seemingly unsurmountable challenges to reentering the workforce.

The second event will take place April 24th and will explore the role of military chaplains with excerpts from “Chaplains Under Fire” and a discussion with Chaplain Ken Bolin (who was an infantryman before he became a chaplain) as well as documentary’s editor, Andrea Hull, and director Lee Lawrence.  The evening will be moderated by Suzanne Tanzi, managing editor of Traces magazine.

Part three of the series, “The Arts and Military Healing,” will be presented by Smithsonian curator Jane Milosch on Veteran’s Day. We’ll keep you posted about the time and location.

Although the Humanity Explored film festival is over, there still seems to be a live link through another site:  http://learni.st/learnings/86739-chaplains-under-fire

So if you want to stream the doc, you’ve got another chance (and, of course, there is always the DVD you can buy).

Can computers help teach the art of being a chaplain?

Probably not entirely, but they might help prepare chaplains for the challenges that lie ahead, according to an article by Mark Pinsky of the Religion News Service.  He writes:

The animated figure on the computer screen moves carefully among the wounded, darting from one fallen figure to another. Trailing the combat medics, the uniformed military chaplain kneels and performs “spiritual triage,” assessing who is dead, who is soon to die, and who is likely to survive.

For the dead, there is silent prayer; for the gravely wounded and those in pain, there are words of comfort. Checking dog tags to determine the faith of the fallen, the pastor uses language consistent with each faith tradition. At each point in the action, a prompt asks users what they think is the appropriate response, and then offers them feedback on their choices.

It is clear from the article that any such computer program is an adjunct to not a substitution for the mentoring and training only another human can provide.

“We shouldn’t confuse simulation trainers as replacements for chaplains or care providers,”  [Chaplain Jeff Zust, an Army lieutenant colonel and an EMT] said. “Trauma care and counseling need to be provided in person. There is no substitute for human contact in training.”

“There is no way a classroom environment can prepare you,” he said. “But a simulation that puts you through realistic situations can be highly valuable.”

The article then concludes with information about another valuable tool — it is one you will recognize:

A 2010 documentary, “Chaplains Under Fire,” examines the roles of military clergy in Iraq and Afghanistan, and the complexities inherent in their service. The film shows chaplains visiting with soldiers in forward operating bases, watching over them in field hospitals, and meeting their flag-draped coffins when they are returned to the United States.

“It’s exhilarating to be in combat,” says Chaplain Bennett Sandford in the film, after escaping an improvised explosive attack unscathed. But before long, after praying over a slain Marine, the Baptist minister says, “the exhilaration went away.”

We never set out to make a training tool for the military.  But we cannot think of a higher honor than to see our work  being used to shape the chaplains of tomorrow.

Humanity Explored Film Festival is up and running, and you can watch Chaplains Under Fire on-line as well as a number of other great documentaries and feature films.  And, please, give the festival your feedback and spread the word.  Thanks. 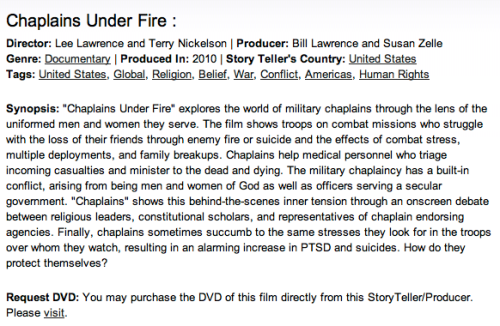 For all of you who ask us where you can watch “Chaplains Under Fire”– well, we are proud to announce that the documentary will be part of the next Humanity Explored film festival whose organizers, Culture Unplugged, make it easy for everyone to attend: it is on-line, free, and runs for a year. 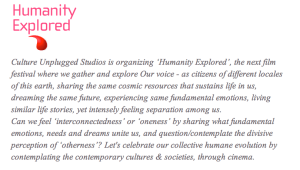 The 2013 festival will launch later this month and, in the meantime, you can still check out the 2012 films. 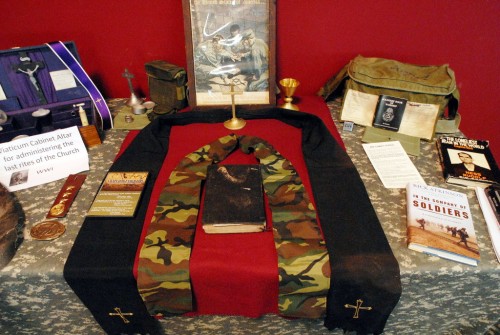 When Kay Campbell covered the anniversary of the military chaplaincy, she handed the senior chaplain a copy of the documentary — which he immediately included in his collection of chaplaincy memorabilia, adding a note of ecumenism since our documentary features chaplains from various denominations and faiths.

Kay Campbell is an award-winning writer for the Huntsville Times.  She  reviewed Chaplains Under Fire last year.

Wonderful screening the other day thanks to the ArtReach Foundation in Atlanta whose founder and head, Susan Anderson,  organized a small gathering of people intensely committed to the well being of servicemen and women, veterans and military families.  I had first gotten to know ArtReach a couple of years ago when I attended one of its workshops in which veterans and civilians explored the journey home through movement, art, and writing — and the sheer joy of play.  It was pretty powerful stuff.

It was great to see the kind familiar face of George Wieder and the dynamic Christi O’Hare, who heads ArtReach’s Project America for veterans.  Between them and Susan Anderson, this would have been enough to guarantee a good conversation —  but add to the mix…

two doctors from Georgia Tech Research Institute (one of whom is also a vet) who will be researching the impact of ArtReach’s work;

Peter McCall,  founder of Care For The Troops, which is an amazing resource;

Catherine McCall, a family and marriage therapist who is very active in helping prevent and heal child abuse;

Chaplains with the Georgia Army National Guard also came, including its head chaplain, Air Force Lt Col Elizabeth A. Harris-Lamkin, who had some very interesting things to say about mentoring young chaplains —  pastors in their own communities one day and, the next, they are deployed to Afghanistan where troops in their care come from across the spectrum of faith and non-faith and all face life and death situations

…and what you get is an intense and honest conversation that delved into the challenges chaplains face, how different people believed they should act, the role (positive and negative) of outside critics and observers, the need to understand the realities on the ground, the First Amendment duties and constraints on chaplains, the difficulties of legislating ‘good behavior,’ the enormous need of troops and families, wounded warriors and suicides, the role church congregations can play in helping military families,…

Thank you all for taking the time to watch the film and discuss it and the issues it raises with such insight and compassion.

Back to Chaplains Under Fire home page

from Fallujah night scenes to the Brooklyn Philharmonic

Ever been to Kingsborough Community College? It’s where Brooklyn meets the Ocean at Brighton Beach, and on Monday the college hosted a small jobs fair in the breezeway that connects the cafeteria from a building of classrooms and library.  That’s where I met met Josephus Tudtud, a slender young man with fine features and the eagerness of a racehorse waiting for the gate to swing open.  Josephus is getting his Associate’s degree in media technology and management, twelve years after he first picked up a camera as he set out with his Marine unit to Iraq.  Originally it was to have images of his daughter and to leave her a record of times with her dad in case he didn’t make it back.  In Iraq, he shot more video, taught himself the basics of editing and compression to make the files small enough to mail back to his wife and little girl.  He has a segment in a polished and engaging NYC Media video about arts in Brooklyn.  Josephus’s 6-minute segment focuses on the Brooklyn Philharmonic and its dynamic, maverick conductor.  You can watch it online (if you want to fast forward to Josephus’s segment, it starts at 6:47).

With any luck, the main web site of Chaplains Under Fire will be back up and running within the next 24 to 48 hours.  Our apologies….

We had about 35 people show up for CUF at our screening in February. There were two active duty chaplains in attendance and three retired chaplains. All of the response was positive. One woman was upset that anyone would take issue with having chaplains in the service. One of the retired chaplains pointed out that chaplains are to assure that everyone has religious freedom. Obviously there have been problems at times, but this documentary addresses the issues fairly.

We are showing the film this Thursday, March 8 at Southern Pines United Methodist Church in Southern Pines, NC at 6:30 pm. FREE Everyone welcome!

Pass the word along to anyone you know in the Southern Pines area — thanks!

Back to Chaplains Under Fire homepage